Carving Out A New Place In The World 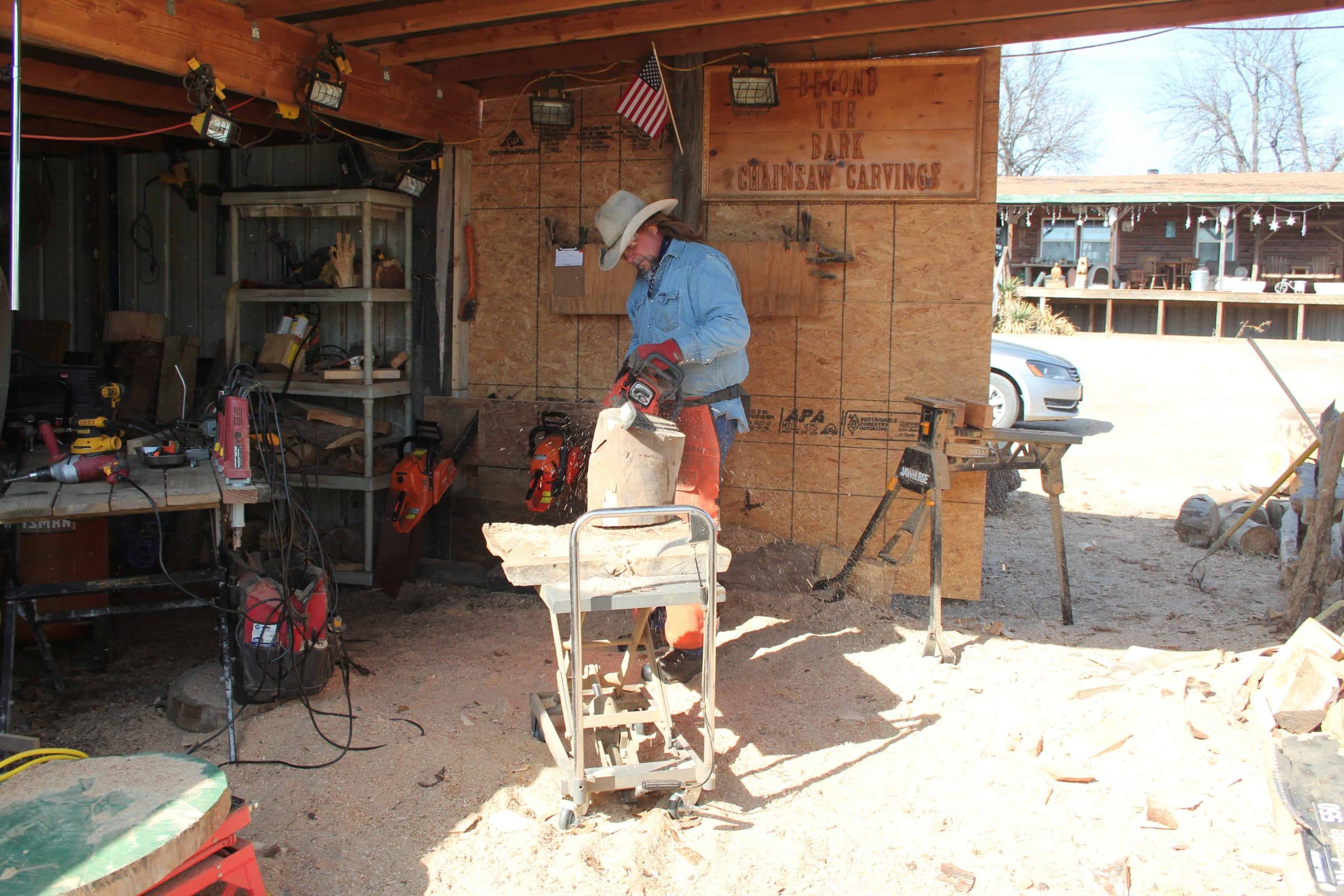 Carv­ing Out A New Place In The World

I think most would agree that art is a form of expres­sion. Some artists use paint and a can­vas. Oth­ers use words and paper, while still oth­ers use clay and a potter’s wheel. And then there are those who wield chain­saws. Yes, it’s true! I saw it unfold before me; a lump of wood became a mush­room under the gnaw­ing bite of a chain­saw. It is a tad uncon­ven­tion­al, I will grant you. But nonethe­less, it is it def­i­nite­ly an art form.

Lum­ber­jack or fire­wood prob­a­bly comes to mind when one hears the word chain­saw. Or maybe even the thought of Hal­loween and the Texas Chain­saw Mas­sacre when we hear one fire up at a rac­ing tem­po. But in the hands of Chuck Williams, unique art will come to mind with the wield­ing of a chain­saw and a 3‑D vision of what a chunk of wood can become.

While watch­ing Chuck whit­tle away at that lump of dead wood, I saw some­thing come to life. Not only the piece of art he was cre­at­ing but a pas­sion inside of him that began to breathe and func­tion as one. Imag­ine if you will, the wild, long-haired rock gui­tarist rip­ping it up on stage wield­ing his musi­cal ax in a fren­zy of ener­gy and cre­ative flow with his long hair vibrat­ing with sta­t­ic in the sound waves. Now imag­ine the same image only with a chain­saw instead of a gui­tar and you will see Chuck in his cre­ative state. Wood­chips are fly­ing through the air like sparks from a rock concert’s pyrotech­nics. The noise is loud yet with a flow­ing rhythm and the art of it all unfolds before any­one watch­ing the show.

“It just hit me one day. I want to carve a turkey and so I thought I would give it a shot. After the class, I took to it like a fish to water. I can see 3‑D but for some rea­son, I can’t draw”

This wood carv­ing gig start­ed over three years ago for Chuck when he got a notion to carve a turkey. He had a prob­lem though; he didn’t know how to do it. So, he did what most of do these days and Googled it. The results led him to a man in Wash­ing­ton who taught a class on chain­saw carv­ings. After an agree­ment on price, the fam­i­ly head­ed up there for a vaca­tion and a three-day class for Chuck.

“It just hit me one day. I want to carve a turkey and so I thought I would give it a shot. After the class, I took to it like a fish to water. I can see 3‑D but for some rea­son, I can’t draw,” Chuck said. Being a tile lay­er for over 30 years, this carv­ing and chain­saw sculpt­ing idea was not some child­hood dream that had whit­tled away at him for years, he explained. He enjoyed his pro­fes­sion and had not giv­en any thought to a career change. How­ev­er, after return­ing from Wash­ing­ton, carv­ing a bear and a few eagles and then tack­ling the turkey, his busi­ness Beyond The Bark Carv­ings was born.
“While I was tak­ing that class, I saw all these mam­moth, beau­ti­ful pieces and I was inspired. This year I went full time and quit doing tile,” Chuck said.

I have used the word whit­tle in this arti­cle because it describes his method­ol­o­gy for cre­at­ing a piece. In fact, many of his carv­ing friends call him “The Whit­tler” because of his cau­tious nature of trim­ming. He quipped that many of his carv­ing friends just go in there and start knock­ing chunks of wood off…and are very good at.
“It’s a process of elim­i­na­tion and once you cut it off, you can’t get it back,” Chuck said. He quipped that he is get­ting quick­er at it though.

He does a vari­ety of pieces, but his favorites are Native Amer­i­can pieces such as busts and feath­ers. He plans to begin a project in the near future where he will carve busts of what he calls the four great chiefs. These com­prise of Sit­ting Bull, Red Cloud, Qua­nah Park­er and Geron­i­mo. Each one will be 18–20 inch­es tall when completed.

He recent­ly gained a great deal of recog­ni­tion for his work due to his giv­ing nature and gen­eros­i­ty to those fam­i­lies who recent­ly suf­fered a dev­as­tat­ing loss in the gas explo­sion near Quin­ton, Okla­homa in Jan­u­ary of this year. Chan­nel 6 News spot­light­ed him for his kind­ness in donat­ing the “oil field cross” to the fam­i­lies who lost their loved ones in the explo­sion. The news seg­ment had over 18,000 shares and went world­wide, Chuck said. He has been get­ting orders ever since.

As for the cross­es, the idea came to him after see­ing a mes­sage on Face­book that asked for peo­ple to pray for the fam­i­lies of those men tak­en so trag­i­cal­ly. The mes­sage had the pic­ture of a hard­hat, pipe wrench and pair of boots on the ground as a memo­r­i­al. He thought what a great carv­ing that would make. He decid­ed to make the carv­ing and then donate it to the well site or the town. He used Face­book to help locate the right peo­ple but instead received a sim­ple request for even a bet­ter idea.

“Some­one reached out to me and asked if I would do one for one of the fam­i­lies. I thought to myself, I can’t do just one for only one fam­i­ly. So I decid­ed to make one for each of the fam­i­lies and donate all of them.” After the news sto­ry, his ges­ture of good­will went viral and the orders began com­ing in left and right, he said.

One of the most intrigu­ing parts of Chuck’s work is not the actu­al art­work that he cre­ates, but the atti­tude in which he employs for his enter­prise. He believes in the best out­come as opposed to the best income. By this I mean, he cares about oth­er aspects besides just the dol­lar amount bot­tom line. For instance, he doesn’t believe in chop­ping down a beau­ti­ful healthy tree because he can use it as a means to make mon­ey. Instead, he only works with trees that have been dam­aged and uproot­ed by high winds or have fall­en by oth­er means which occur nat­u­ral­ly. The oil field cross­es, for exam­ple, are all being carved from the downed sycamore trees that fell as a result of the tor­na­do that blew through mid-town this past August.
An inter­est­ing note about Chuck is that he is not one of those artists who see the art in the raw mate­r­i­al that needs to be set free by chip­ping or chis­el­ing away at it. Instead, he sees the art inside him­self and the raw mate­r­i­al as the can­vas in which to cre­ate it. He is by far a tal­ent­ed artist with the abil­i­ty to carve out a unique place in the world of art…and of course in any tree that might fall when he is in a‑rockin’ cre­ative frenzy.

To inquire about Beyond The Bark Carv­ing art pieces or to get more infor­ma­tion about live demos, call Chuck at 918–261-8453. 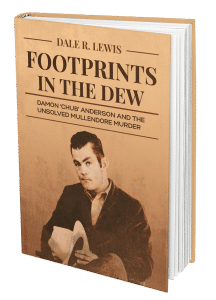 The Sweetest Ingredient Is Always The Right Amount Of Faith

The Stone Lion — What will they do this year?

You Should Read This Perhaps to start, defining what we are not is the best way to describe us. We are not a news source to find the latest local and world events or a magazine to...

When you would rather sacrifice all for what you believe in than live with nothing under the beliefs of another, love enough to be completely vulnerable and to trust again after your soul has been shattered by another, you have been awakened to the cost of every freedom that exists. - C.L. Harmon
X
%d bloggers like this: